History
The year was 1888. It was a hot Virginia Beach summer, in the middle of July. On a certain cottage porch on the oceanfront at 18th street, a small group of vacationers gathered for Sunday morning worship – led by the Rev. Beverly Dandridge Tucker, who would later become Bishop of the Diocese of Southern Virginia. As they talked about things that mattered most in life, they decided that “within 3 years should be erected a chapel or place of public worship for all Christian faiths, regardless of creed

The Norfolk-Virginia Beach Railroad contributed $500 to build a “Union Chapel” at the waterfront and 18th Street to be used jointly by denominations. On Sundays, a Catholic Mass was held early, Presbyterians gathered at 9:30, Episcopalians at 11:00, Baptists at 3:30 p.m. and Methodists held evening prayer at 7:30 p.m. When other denominations built their own churches and moved away, Episcopalians purchased the chapel in 1896, and named it “Galilee by the Sea.” In the early years around the turn of the century, Galilee recorded 128 baptized members, eight teachers and 54 “scholars.” 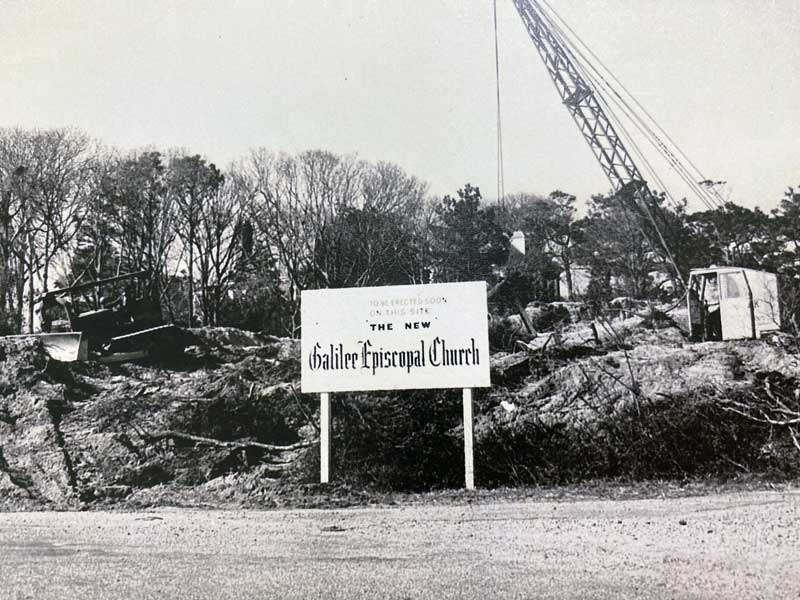 In 1903, Galilee called its first rector, The Rev. Edward P. Miner, and became an Episcopal parish church. In 1926, beach erosion and growth required the small frame church to be moved and a new brick and wood church was built on the same 18th Street property as a memorial to Bishop Tucker. The original frame structure was relocated behind the new church and named Tucker Hall.

Thirty years later, the growth of both Galilee and Virginia Beach required another move – to our present location. The cornerstone of today’s Galilee was laid at 40th Street and Pacific Avenue on July 8, 1956. A renovation program was completed in 1988, adding a new chapel and a large parish hall. In April of 2002, a new addition to the facility was dedicated, nearly doubling the church’s physical space with a large multi-purpose room, foyer and youth and childcare facilities. God has richly blessed Galilee Church over the more than one hundred years of her history, and today our vision remains strong and heartfelt: to be a Christ-centered community bringing the renewal of Christ to a world in need.

We have opportunities for you to serve in the following areas:

Subcribe to Our Newsletter